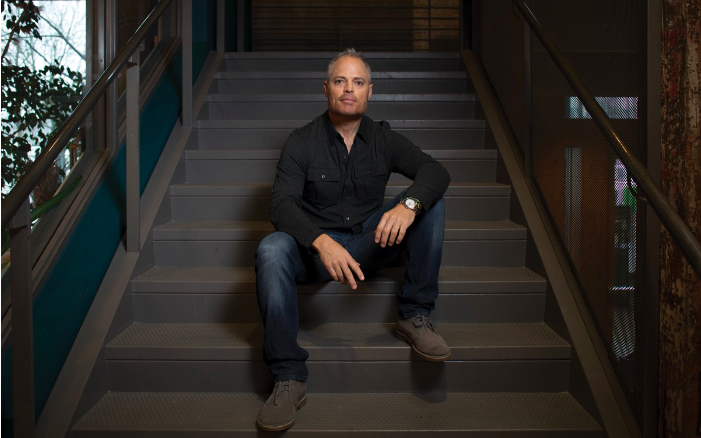 Philip Beere (MRED ’07) got into the business of green building 10 short years ago, but in that time his projects have gained national attention and positioned him as an authority in the field. It all started while he was working on his degree at the W. P. Carey School of Business.

“G Street Inc. started while I was in the Master of Real Estate Development (MRED) program,” Beere says of the business he founded in 2007. “Back then, there were some guest speakers talking about the Leadership in Energy and Environmental Design (LEED) rating system. But, at the time, they were only talking about its use in commercial buildings. I saw its potential for residential use. There are so many older homes in Phoenix with good bones and nice design that are, in many cases, lacking in energy efficiency, healthy interior design, and the careful use of materials. So I renovated a home using this rating system, and it ended up being one of the first of its kind in the country.”

Specifically, it was the first residential remodel in the United States to be awarded Emerald status, the highest level of the National Green Building Standard (NGBS), and ICC 700, a program developed by the National Association of Home Builders (NAHB) and the International Code Council. The modest home also was the first single-family remodel in the United States awarded gold-level certification from LEED, a certification program run by the U.S. Green Building Council.

“Two things were new with that first project,” Beere says. “One was doing an actual remodel, and two was making it LEED-certified, which no one had done before. The LEED rating system advocates the use of a design team, so that made the process better and probably alleviated a lot of potential pitfalls.” He teamed up with Jason Comer (BS Architectural Studies ’06, MRED ’07), Beere’s classmate at the time, as well as a landscape architect, interior designer, and mechanical designer.

Built in 1958 and located in the Pierson Place Historic District in Phoenix, the 1,600-square-foot home was outfitted with new low-e windows, insulation, energy-efficient appliances, heat pump, and plumbing fixtures, all of which helped achieve a 50 percent reduction in water and energy consumption. Interior details made the small footprint more livable, and its proximity to the then-new light rail allowed its residents to be less reliant on cars, a vital component of being green.

“If a home’s occupant must commute great distances to and from work, then the location of the house results in higher carbon emissions,” Beere states. “A non-energy efficient home near one’s workplace is greener than a very efficient home located far from the workplace or area amenities. We see everywhere that people are gravitating back to the urban centers. It’s important to focus on placing homes in areas where people don’t have to drive as much so they can cut down on carbon emissions and spend more time doing the things they enjoy and less time in cars.”

After that first remodel, Beere continued his renovation work until he “transitioned into coaching others, which includes clearing up misperceptions of what a green home is,” Beere says.

“Some people might think an energy-efficient home is a green home. But a green home must address energy efficiency, water efficiency, indoor air quality, design, and material use. Energy efficiency alone does not make a home green. My focus now is on educating others on how to achieve a green remodel and, in some cases, how to build a new green home.”

In 2013, Beere did just that when he was chosen by Mandalay Homes to guide them in completing 14 houses in a foreclosed subdivision in the South Mountain area of Phoenix. The homebuilder was awarded the contract by the city of Phoenix, which used federal Neighborhood Stabilization Program funds to support the project. The one stipulation from the city: The homes should be a “showcase” of energy efficiency.

“The goal was to make it the most highly rated green subdivision in the country,” Beere says. “We were able to achieve that, and the project proved that green design is scalable.”

He and his team were on hand to provide design consultation, third-party certification management, and marketing tools. Beere also developed an education workshop so the builder could indeed showcase the details that earned all 14 homes the United States Department of Energy’s (DOE’s) Zero Energy Ready Home status. DOE defines this grade as a high-performance home that is so energy efficient, a renewable energy system can offset all or most of its annual energy consumption. Plus, all 14 Mandalay homes received NGBS gold-level certification. On this project, too, Beere partnered with a fellow ASU alum, Jesse Garcia, who served as the project manager for the city of Phoenix.

“I’ve always had a lifestyle oriented toward health, and I think the green home reflects that healthy way of life,” Beere says.

“For me, it’s rewarding to educate, to translate the complex into simple terms, and to see projects that materialize into an improved design. If it’s possible for one or two projects to inspire or influence better construction for another project, then that feels like success to me. I’m very happy to be doing this.”