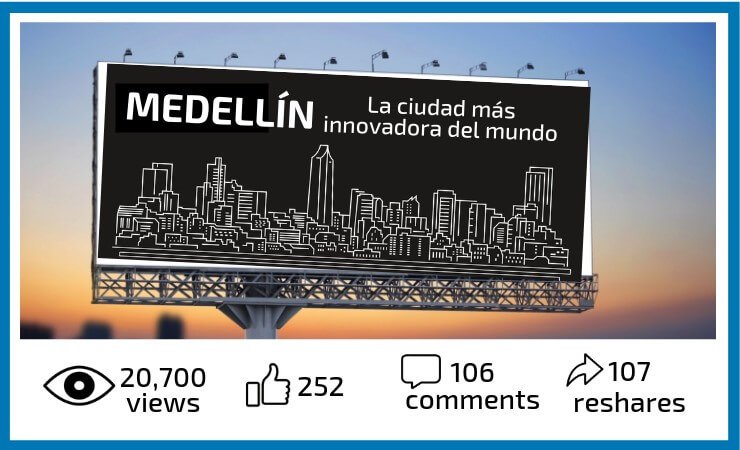 Medellín is Colombia’s second largest city, and maybe most famous for being home to Pablo Escobar’s cocaine-cartel. During Escobar’s rule, Medellín was the world’s most murderous city, with 381 for every 100,000 inhabitants. During the height of his business, Escobar was reportedly worth 50B and ranked on the Forbes list of the world’s most rich.

Between 1988 – 1994, Escobar ordered the killing of approximately 3000 local citizens, which resulted in a city of unrest and curfews. In 1993, U.S. led forces killed the drug lord, which helped Medellín gradually restore normalcy and try to find a new identity.

Today, the murder-rate in Medellín has reportedly dropped to 26 per 100,000 inhabitants, and the city is trying to shed its narco-label. Of late, Medellín has campaigned to transform its image from cocaine and murders to innovation.

Medellín markets itself as the most innovative in the world, in hopes of attracting start-ups, entrepreneurs, and multi-national companies. To this end, the city constructed an innovation center; a massive LEED-certified building named Ruta N (or, Route North). With square footage to fill, the city achieved a minor coup by signing Hewlett Packard as their anchor tenant in 2012. The Hewlett Packard brand was intended to attract start-ups and international entrepreneurs. One could argue, until recently, the plan worked. The marketing pitch by Ruta N is shown in the below video, “welcome to the city of transformation and innovation.”https://youtu.be/oBgBluBjYRM

Reporting and measuring innovation can be a challenge. In order to help cities do so, the 2ThinkNow index utilizes 162 indicators that result in an innovation-score. The 2thinknow indicators include social equality, social inclusion, healthcare, arts, culture, sustainability, gender equity, pollution, and transportation.

In 2014, the 2thinknow index ranked San Francisco, London, Vienna, and Boston as the world’s most innovative. But, where did Medellín rank? The 2014 2thinknow index, ranks Medellín number 265 (out of 500 cities), just behind El Paso, Texas.

In 2015, Medellín’s rank improved to 147. A sharp improvement over 2014, but still a stark contrast to being ‘The Most Innovative City in the World’.

In an attempt to rebrand the city, Medellín’s mayor chases awards and recognition for the city. This plan included bringing international concerts to the city, such as Madonna and Beyoncé, and paying millions of dollars to host the World Urban Forum.

Then, in 2012 Facebook hosted an innovative cities contest. The contest was promoted by the WSJ and Citi. At stake, winning the designation, “City of the Year: innovation”. The criteria was straight forward, the city with the most Facebook likes wins. Medellín citizens were reminded to vote daily. The plan worked, Medellín received the most Facebook votes and was declared ‘City of the Year’ for innovation. Then followed a marketing campaign to attract entrepreneurs and innovators.

Innovation: What comes first, the cart or the horse?

Making a city innovative, takes more than winning contests. Leading innovative cities attract and/or cultivate an ecosystem that draws ‘creatives’. Creatives are attracted to livable cities. Although no exact formula, there is a strong correlation between cities that promote entrepreneurship, sustainability, arts and culture, ease of doing business, collaboration, and small business finance, and those that are rank high in innovation.

Medellín’s approach to innovation was unorthodox at most.  The city tried marketing itself as an innovation leader, but has no infrastructure in place to retain and keep creatives and entrepreneurs. Many talented tech entrepreneurs, such as Alexander Torrenegra of torre.co, left the country for cities that are more innovative. In the case of Torrenegra, he emigrated to the United States. Many talented startups who gave Medellín a try, ended up leaving. Not only did the entrepreneurs leave, but the larger companies also left.

In 2015, Hewlett Packard walked away from a 15-year lease at Ruta N. This left Ruta N without an anchor tenant and international brand. Recently, Huawei committed to leasing the space previously leased by Hewlett Packard.

Shortly after Hewlett Packard’s departure, Kimberly Clark cancelled plans to construct an innovation center in Medellín, citing obstructions by local officials and a void of top-level local talent. According to an anonymous source at Kimberly Clark, all but one of the local engineers hired to conduct research and development at the center were terminated, for what was described as and inability to perform and complete tasks to Western standards. The Kimberly Clark feedback is echoed by an OECD study, which places Colombia last in critical thinking.

After the departure of Hewlett Packard and Kimberly Clark, Medellín’s innovation claim began to unravel. Why was Medellín in the innovation conversation to begin with?

In 1976, the first passenger gondola used by a city was the Roosevelt Island Tramway (RIT). Thirty years after the RIT, Medellín began operation of its city gondola in 2006. Six years later, the Medellín gondola became the icon for its innovation claim.

For the WSJ/Facebook contest, Medellín claimed the gondola and hillside escalator are the sources of innovation and a means of “social inclusion” or “social urbanism”. This is in stark contrast to reality, being that Medellín ranks as the worst city in the world for income inequality.

What Now? Place People First And The Innovation Will Follow

Facebook no longer has contests for cities and innovation. Such contests have gone away, replaced with measured approaches, such as the 2thinknow index and patent reports. Many who were seduced by Medellín’s marketing campaign and verbal commitment to innovate, including Hewlett Packard and Kimberly Clark, have left. Not only has Medellín lost two top brands, but the city has also lost entrepreneurs who gambled on doing business in the former city of Pablo Escobar.

Alan Colmenares, a Venture Capitalist from the United States, came to Medellín to sponsor Founders Institute, a tech-mentorship program. The program successfully graduated two cohorts. The business model, host Silicon Valley CEO’s to mentor young, local startup entrepreneurs, which in some cases resulted in venture capital funding. Early success stories include Diego Benitez and his SiembraViva, and Daniel Morales and his FloresyMas. Benitez and Morales are from Medellín.

Initially, Ruta N seemed to embrace Colmenares’ Founders Institute. But, things came to an abrupt halt when there was a leadership change at Ruta N, which attempted to replace Colmenares’ program with a their own. The Ruta N plan featured local businessmen as mentors instead of the Silicon Valley-based CEO’s.

Colmenares stated, “After two cohorts, a number of viable startups were produced and we were very satisfied. Guiding young entrepreneurs through the startup process is a challenge, especially when they come to us with not much more than a great idea, and lacking a business plan. “

Colmenares said, “Just when we were gaining traction and producing measured results, Ruta N decided to go with their own home-grown program.”

The Ruta N homegrown program has yet to produce a market proven startup.

Colmenares proved there are local innovators, but critical to their success is guidance from mentors and access to business tools.

For many in the city, the Medellín marketing campaign became known as ‘the lie’. While the city pursued accolades and awards, the more serious problems did not disappear. Income inequality has worsened, one in two children in Medellín go to bed hungry, violent crimecontinues to rise, and the city recently banned all cars due to a red-zone air pollution alert. Medellín’s air quality is some of the worst in Latin America.https://youtu.be/GnYtveg_7dg

Meanwhile, Medellín produces a mere 35 patents annually, whereas a city comparable in size, such as Phoenix, Arizona, produces nearly 1500. San Francisco produces 16,000 patents annually. Patents may not be the perfect measure of innovation, but they are an indicator.

To capsulate the above, if a city is not friendly to the environment, entrepreneurs, and social issues, then there is little chance they will be innovative.

Andriaan Alsema, Owner and editor-in-chief of Colombia Reports, came to Medellín in 2008. Like Colmenares, Alsema is skeptical about Medellín’s innovation claim, he states, “The government has simply embarked on a very clever and effective marketing strategy, using the 2012 WSJ contest as a confirmation of something that never existed. Following the rigging of the contest, the government made many promises, but none of them have materialized.” Alsema says, “Things have changed, or unraveled rather, since the city began promoting itself as innovative. For a while, it looked like the local government was serious about innovation, but that was just window dressing.”

Creative people spurn innovation, and are most attracted to cities that are livable and sustainable. If a city desires innovation, there are lessons to learn from Medellín. Mainly, invest in people not in propaganda, as explained by Stanford University President, John Hennessy.

In 2012, Medellín captured the world’s attention with an aggressive marketing campaign. But, in order to advance from winning awards to cultivating and attracting innovators, resources will need realignment. The government will need to rely on outsiders, such as Colmenares and his team of mentors. The city will need to build programs to attract and keep creatives.

With this, the question for Medellín is, what kind of cities do creatives gravitate toward? There is no coincidence that top cities for creatives coincide closely with the 2thinknow list for top cities in innovation.

Instead of funneling resources into winning awards and installing billboards, there is a need to solve problems that will make the city more livable and attract and keep innovators. Needed, policy to address severe inequality, transparency or corruption, gender equity, the environment, and hunger. One might say, Medellín boasts a pride too strong to openly discuss these issues, and would prefer to keep the negative topics out of the innovation conversation.

In an effort to chase innovation, all cities in Latin America can learn from Medellín’s errors. As we see with Medellín, marketing does not spurn innovation. Instead, the solution is to start with a list of questions, such as: What is my city doing to attract creatives? Is sustainability a priority? Are we friendly to outsiders? Is it easy to setup a business? What are we doing to keep talent? What are we doing to nurture talent, especially the under privileged? Is my city collaborative? What financing programs are in place for small business?

Each city has its own issues that obstruct their path toward innovation. The question for Medellín and other cities, is it realistic for them to create a culture of innovation?